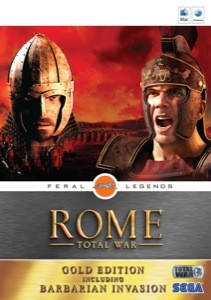 Play as one of three great Roman families, whose thirst for power will stop at nothing. This the world of Hannibal, Julius Caesar, Cleopatra and a thousand others. This is a world of soldiers, gladiators, tyrants, monsters and fools. It's a rich, exciting world, awaiting a conqueror - you! You must use military genius to build an empire that stretches across Europe and Africa. Finally march on Rome to seize control of the greatest empire in the world. Then in Barbarian invasion either defend it or lead a Barbarian horde and bring the once mighty empire to its knees.