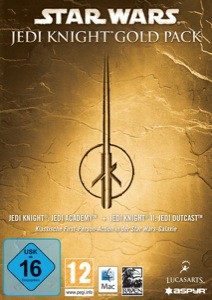 Star Wars Jedi Knight II: Jedi Outcast
As Kyle Katarn, agent of the New Republic, use the Force to combat a new evil plaguing the galaxy. Wield over 8 Force abilities including the Jedi Mind Trick,
Force Lightning and Force Grip, while choosing wisely from an arsenal of 13 weapons. Challenge other players online with or against a variety of AI Bots, gaining additional Force powers. Test your skills in single-player missions or in multiplayer games. Interact with legendary Star Wars characters, such as Luke Skywalker and Lando Calrissian, voiced by Billy Dee Williams.